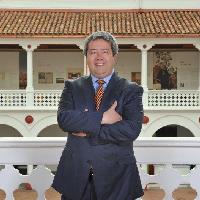 He was director of the Master's in Political and International Studies at the Universidad del Rosario and also of the Master's in Security and Defense at the Escuela Superior de Guerra de Colombia. He was an advisor to the Colombian Ministry of Defense. He has been a professor at the Colombian universities Rosario, Andes and Javeriana. In the latter, he served as director of the department of political science and director of the specialization in public opinion and political marketing. He has been visiting professor at: Sciences Po (CERI), Paris, France; University of Barcelona (Research group “Studies of power and privilege” - Faculty of Economics and Business), Barcelona, ​​Spain; Max Planck Institute for Foreign and International Criminal Law, Freiburg, Germany.