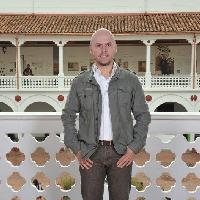 Associate professor, director of the Observatory of Networks and Collective Action (ORAC) and director of postgraduate courses at the Faculty of International, Political and Urban Studies. Obtained a master’s degree in Analysis of Contemporary Political, Economic and International Problems from the Institute of Higher Studies for Development (IAED) in 1997, and then a master’s degree in Political Studies from the Institute of Political Studies (IEP) in Paris in 1999. Later on, he obtained a PhD in Sociology from the School of Higher Studies in Social Sciences (EHESS) in Paris in 2010.

His doctoral thesis dwelled on the formation vectors of international audiences that have been affected by the consequences of the Colombian armed conflict. Before working in the Universidad del Rosario, he was a professor at the Institute of Advanced Studies for Latin America (IHEAL) of the Sorbonne-Nouvelle University, at the Institute of Political Studies (IEP) in Paris, and at the Universidad Externado of Colombia.

He has also been visiting professor at the School of Higher Studies in Social Sciences (EHESS) in Paris and at the Lumière Lyon II University. On the other hand, since its creation, he has participated in the JANUS Group for Interdisciplinary Studies on Peace, Conflict and Post-conflict of the Universidad del Rosario. He has also collaborated with the Pragmatic and Reflective Sociology Group (GSPR) of the School of Higher Studies in Social Sciences for several years, on the development of computer tools for the qualitative and quantitative analysis of texts.

Currently, his academic and research work focuses on issues related with transnational political activism, democracy, social movements, and collective action in post-conflict and armed conflict settings. He is also interested in the study of the configuration of public problems on a national and international scale. His research has been carried out with an interdisciplinary approach, especially one that looks for points of intersection between International Relations, Political Science, Sociology and Digital Humanities.